Get the Facts about REAL ID Cards & Compliance

You are probably aware that REAL ID documents are being issued to citizens throughout the United States. This can be a source of confusion and misinformation. Following is a snapshot of facts about REAL ID.

What is the REAL ID Act?

The REAL ID Act of 2005 is a cooperative effort between the U.S. Department of Homeland Security and states to ensure high standards for personal identification documents, such as state driver’s licenses. The standards apply to the process used to verify ID and the material quality (including security features) of the card itself. The overarching goal is to strengthen ID verification and increase national security.

What should I care about the REAL ID Act?

Eventually, U.S. citizens will need a REAL ID document to:

The implementation dates for these situations are being phased in gradually, with boarding aircraft as the final phase.

Featured in the image below is the current implementation status for every state (last update on July 20th, 2016). The public will continually be given ample notice about when the new rules and enforcement go into effect. 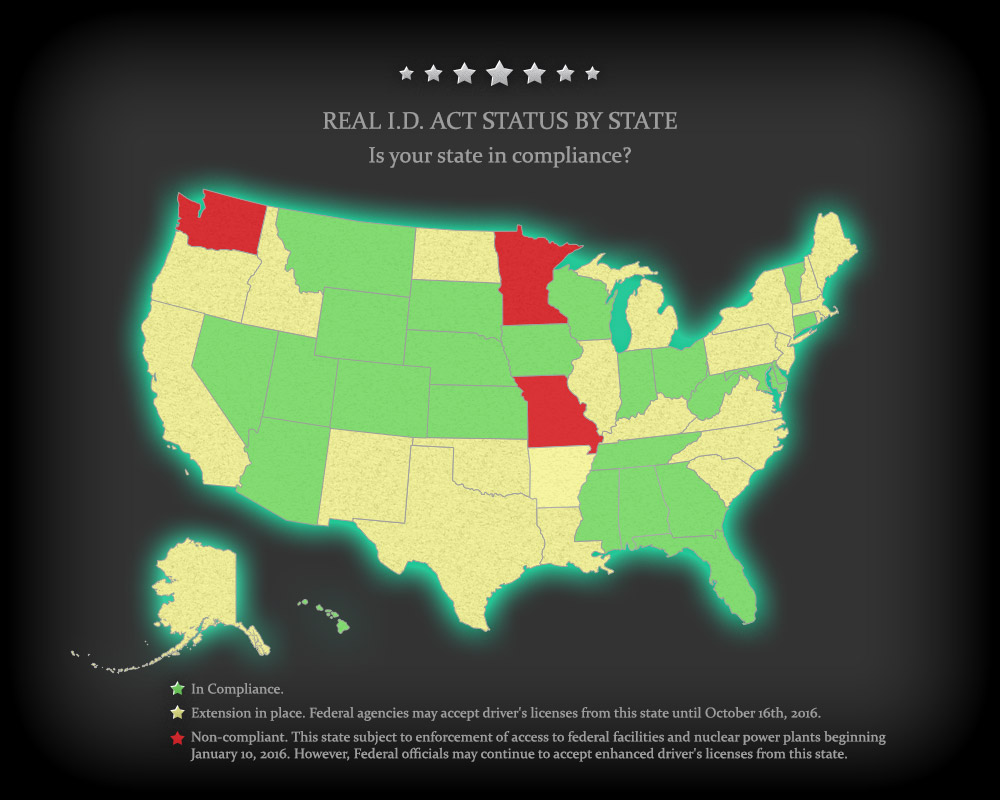 All 50 states, the District of Columbia, and U.S. territories must produce and offer residents the option of a REAL ID card. States go through a rigorous process of proving to the Department of Homeland Security that they’ve met the REAL ID standards.

How is a REAL ID Different from my Current ID?

In most cases, a REAL ID card resembles the standard license or ID card but has a gold circle with star cut-out at the front, upper right corner. States who achieve compliance in stages may issue partially-compliant licenses and ID cards with a solid gold star (or similar icon). Non-REAL ID licenses and cards issued by a state include the caveat, “NOT FOR FEDERAL OFFICIAL USE” in black, in place of the gold circle-star symbol. Such cards are not valid in any of the federal access situations listed above. (The I.D. Checking Guide includes images and descriptions.) Each state agency decides which of its agencies will accept non-REAL ID cards as proof of ID.

The REAL ID card is designed to improve national security but is not a national ID card. There is no federal database of information collected by states and territories during the application process.

How to I Obtain a REAL ID?

Applying for a REAL ID card is optional for every U.S. citizen. To find out what specific documents you will need to apply for a REAL ID card, check with your state DMV. For more information, please visit the U.S. Department of Homeland Security website and search "REAL ID."

Thank you for subscribing