The trend of issuing driver's licenses to undocumented immigrants picked up speed beginning in 2014. California, Colorado, Connecticut, Vermont, and the District of Columbia now grant so-called "drive-only" cards to residents who can’t provide proof of legal residency, or who don’t have a Social Security card or other documentation required for a standard license.

There has been huge demand already for what critics deride as a "driver's license for illegal immigrants." According to a recent article in the Merced Sun-Star, in just three months nearly half a million undocumented residents have already applied for California's new drive-only card.

The new drive-only cards have made headlines--and caused headaches for banks and other businesses that weren't sure if the new licenses counted as federal identification. Here we sort out some of the facts.

An orange "DO" flags
this as a Drive-Only Card. 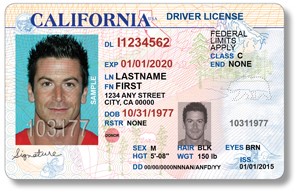 “FEDERAL LIMITS APPLY” means
this is a Drive-Only Card.

Where the Rubber Meets the Road: Is a Drive-Only license valid as ID?

The answer to this question varies by state. A drive-only license that clearly states “Not valid for federal identification, voting, or public benefit purposes” makes it easier for banks, businesses, and government agencies to decide whether or not to accept it as ID. But when gray areas remain, DMV websites and industry guidelines can make it clear where to draw the line.

Thank you for subscribing